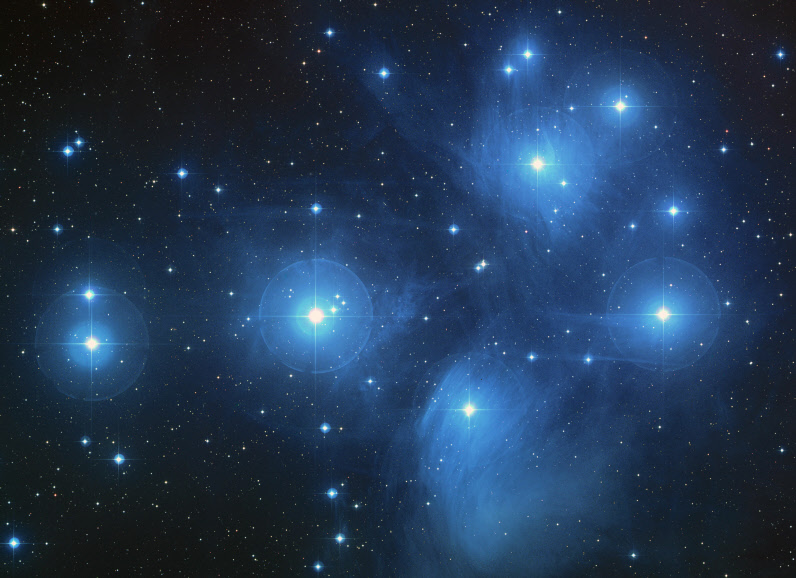 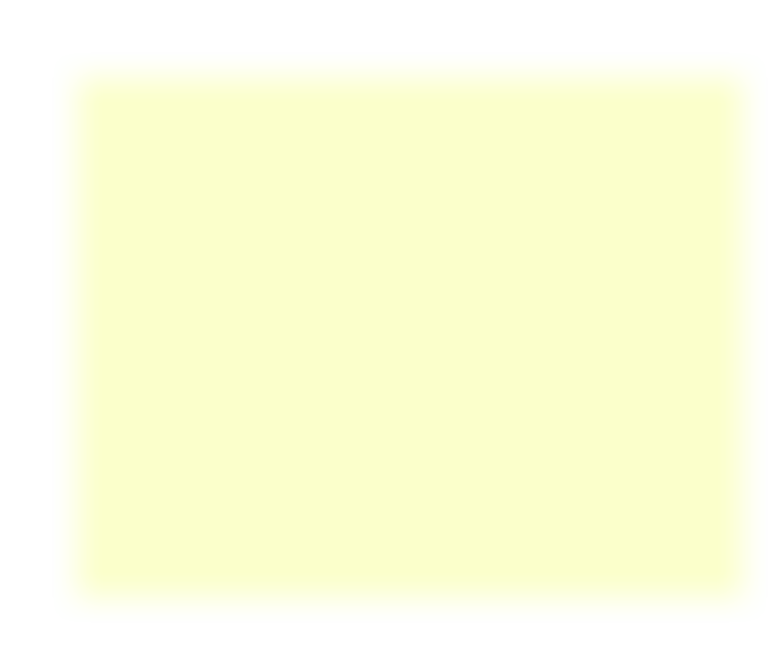 Inner Sky Electrum v. 2.2 released.
New features: innovative and carefully designed Aspect display
on the Chartwheels (1ChartMode). Possibility of calling the Aspect patterns
of any celestial body/point by cursor click (1ChartMode, 2ChartsMode),
and some other extras… 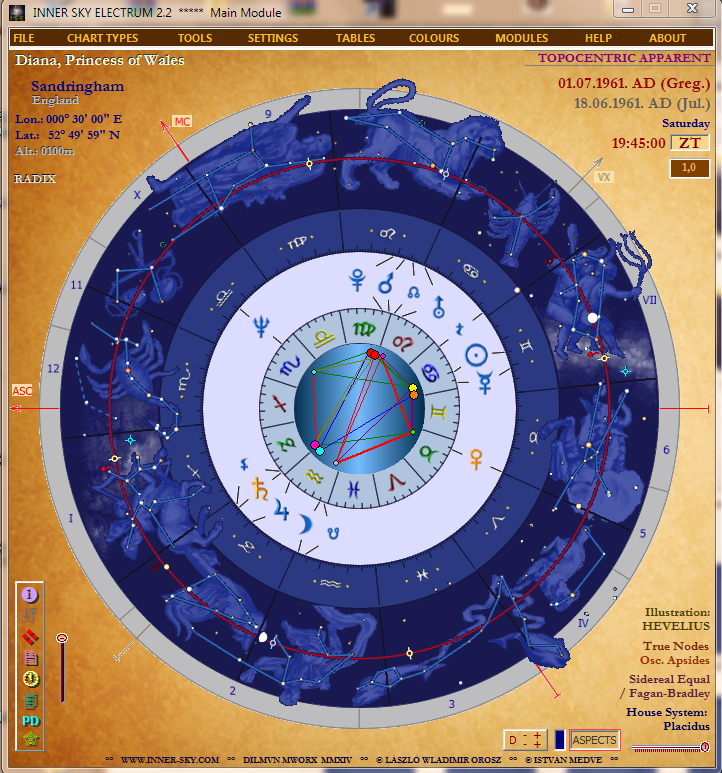 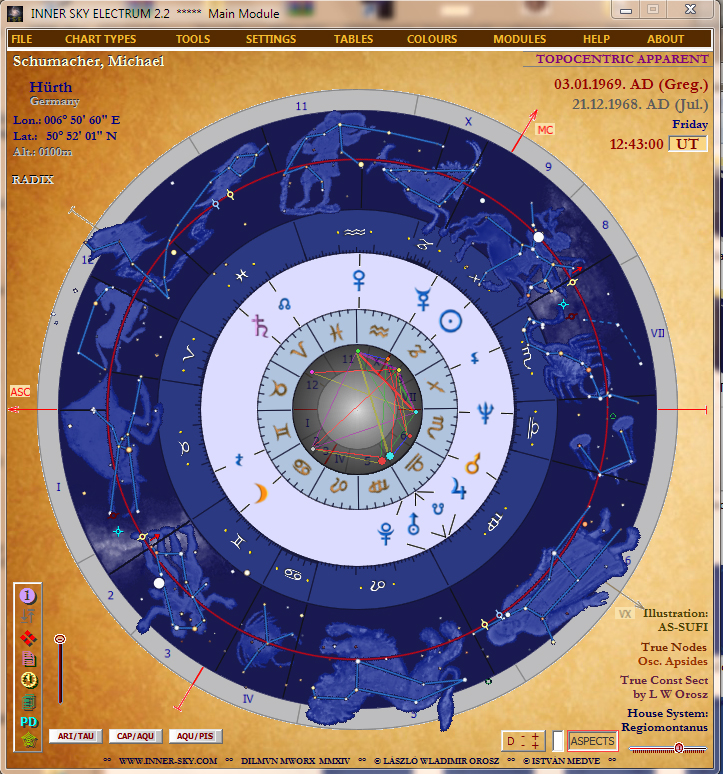 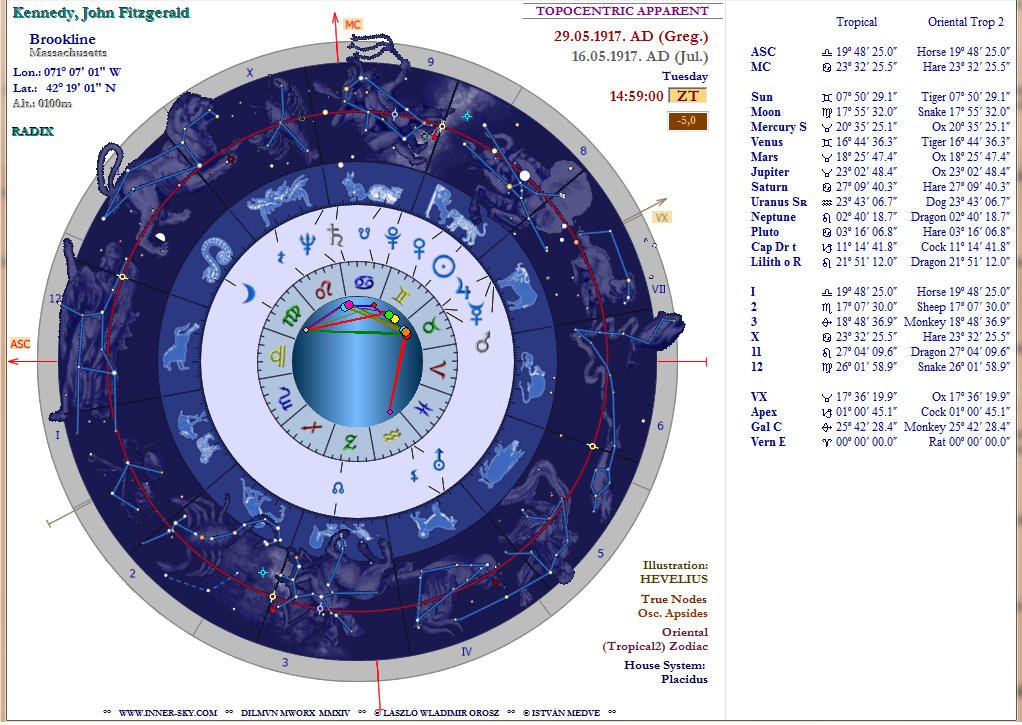 Inner Sky Electrum 2.2 is an innovative software
for both astrological and archaeoastronomical use providing
data in an almost 11000-year interval - between 5400 BC and 5400 AD - with
the accuracy of the Swiss Ephemeris meeting all requirements.

(The detailed hardware requirements can be seen below.)
We know lots of excellent softwares in the field of astrology, however,
as a result of our specially complex previous learning and the system of
our expectations we still felt that something was missing.
We were in agreement that if we solved this shortage by producing an
aesthetic and excitingly designed program which was innovative
technically as well as in its view it would be worth the great amount
of work and huge length of time invested.


II. What is original in view and implementation
1. Main /Chart/ module

To be (approximately) well-informed about ISE 2.2, you must see the
screenshots and the demo demo videos. (Pushing the Video button you can
find 10 important demo films on this software, they must be watched.)
This place is enough only for some features.
Our world view is synoptic, so our astrological outlook is the same and
the software we made cannot be different.
Our computational system consists of four modules, which are connected
with a Birth/Event Databank expandable practically with no limits, also
with a Birth/Event Input Panel considerably supporting a vast geographical
database and all necessary time conversions, as well as more kinds of Time
Step Panels (for Radix, Transits, Secondary directions, Primary directions).
We would have liked as much information as possible to be on display, but it
is restricted by the screen surface. We have got an idea to solve this
problem: all displayed items can be turned transparent to some extent with
the aid of a trackbar.
The positions of the planets can be indicated in four different systems:
Topocentric Apparent, which is connected to the actual place of the
birth/event - not taking the problem of light transmission speed into
consideration. Topocentric Theoretic, which is connected to the actual
place of the birth/event - taking the problem of light transmission
speed into consideration.
Geocentric Apparent, which is connected to the centre of the Earth - not
taking the problem of light transmission speed into consideration.
Geocentric Theoretic, which is connected to the centre of the Earth
- taking the problem of light transmission speed into consideration.
The colours of planets reflect the traditional dignities in case of the seven
'ancient' planets: blue - peregrine, grey - detriment, yellow - domicile,
mauve - fall, red - exalted. We do not pay attention to dignities in case of
the transsaturnals, the Dragon Head, the Dragon Tail and the Lunar Apogee
(Lilith) and Perigee positions, these are always blue.
(When comparing the Topo- and Geocentric planet data mainly the differences
of lunar positions are significant because of the parallax caused by
the proximity of Moon.)
One or two horoscopes can be on display at the same time in the Main Module
with or without a selected house system. The exterior and interior horoscopes
are interchangeable with just one click (Chart swap).
The innermost zodiac is always the tropical (related to the Vernal Equinox)
system, the second can be of course the equisectorial sidereal (jyotish)
context - you can choose from more than twenty ayanamshas, what is more, the
user's own ayanamsha is also possible to be input if needed.
It is a unique option that the equisectorial sidereal zodiac is convertible
into inequisectorial, in fact, in two ways. - It is this writer who is the
author of a theory about the non-equal division of true constellation sectors.
Briefly about it: a constellation sector is opened by the first 'fixed' star
(in the direction of the planets' common moving) that is clearly belonging to
the given constellation and traditionally considered so. The sector is bordered
by the first 'marker' star of the next constellation. The ecliptic plane
divides the sectors into northern and southern regions in some cases e. g.
Aries - Taurus or Aquarius - Pisces, so, for example, a planet with northern
ecliptic latitude enters the constellation of Pisces much sooner than one with
southern latitude - in this system. (See the demo film; more about this topic:
in the near future, probably.)
It is an interesting detail that we introduced the determination of dynamic
degrees (with attention to the problem of the sectors divided by the ecliptic
plane), which can be listed or asked for with a cursor click and of course you
can list them too. (More about it: demo film(s)).
There are more than 200 stars, which are visible to the naked eye, in the
outermost track containing actual constellations and their most important data
(traditional name, Bayer-letter, longitude, latitude, visual magnitude) can be
asked for with a cursor click. This is where the planets move in 'their reality'
and where the Equinoctial and Solsticial Points, the Apex and Antapex, the
Centre of the Galaxy, the Milky Way and - if needed - the imitated scintillation
can be shown as an option.
It is a unique possibility too that in the zone of the sidereal zodiacs the users
can display 12 kinds of Lunar Mansions with both theriomorphic pictograms
and traditional symbols. (Demo film!)
One of the most special and unique attribute of our software is that it offers
the option to display above the constellations their illustrations extracted
from old star atlases or other sources. You can admire the anthropomorphic and
theriomorphic ways of representation in the European culture (Hevelius,
Grotius and Kircher's 'occult' one), the Arabic ideas (Abd al-Wahid,
Abu Ma'shar, As-Sufi), the zodiacs from archaic Egypt (Esna, Athribis,
Denderah), the (reconstructed) Sumerian constellation system, that of
India or even the depictions from the Chinese Lunar Mansion system
(based on the constellations).
While creating Inner Sky Electrum 2.2 we also had the aim of emancipating
the Vertex-Antivertex axis. The First Vertical as the determining main
circle of the Toposphere has got important role besides the Horizon
and the Meridian.
(It will be an emphatic item of the in mundo context in
Primary Directions Discovery Module.)

The planets and other objects can be accentuated as the user prefers them
and shown on aesthetic graphs meeting all requirements either according to
local determination (quadrants, house-triplicities, or house quaternities) or
according to cosmic situation (elemental qualities, seasonal division). More
graphs in the module: exact planet positions in the different house systems,
Ascensional Difference.

We consider the aspects of various celestial objects to main axes inside the
system of placidian semi-arcs as well as mundane (in mundo) and ecliptical
(in ecliptico) context.
We have a special and exciting offer in mundane relation: we took the the
mundane space between the MC/IC and the Vertex/Antivertex into account.
Although this consideration is by far verfiable theoretically, it is almost
'untouched' area - in spite of the fact that there were some feelers towards
it in the history of astrology.
Keys for primary directions: besides the popular Naibod's key, Ptolemy's key
and the Cardan's key are also accessible as well as the the Simmonite's key
taking the real solar arc of birth into account and even the Synodical key.
It is a pro-user option to save the aspects already exact into a Workbook and
comment them for a later use. (On the details of this process: see demo film).
Of course, it is also possible to make a list of direct and/or converse directions
that become active during the lifetime - according to planets, aspects, types of
aspects, with improvements in intervals etc. (See demo film.)


III. A full list of the parts and options belongig to Inner Sky Electrum 2.2

Inner Sky Electrum 2.2 was developed for operating systems
Windows Vista, Windows 7, Windows 8
(works on both 32-bit and 64-bit version)
For the perfect display of some zodiac symbols
and Chinese logograms you must install Service Pack 1
to your actual operating system
(if you have not already done so)

!!! We DO NOT ADVISE using this software with
Windows XP and earlier operation systems
as the working of some display elements may be improper !!! 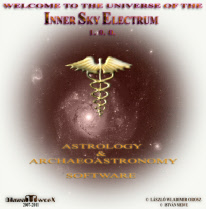