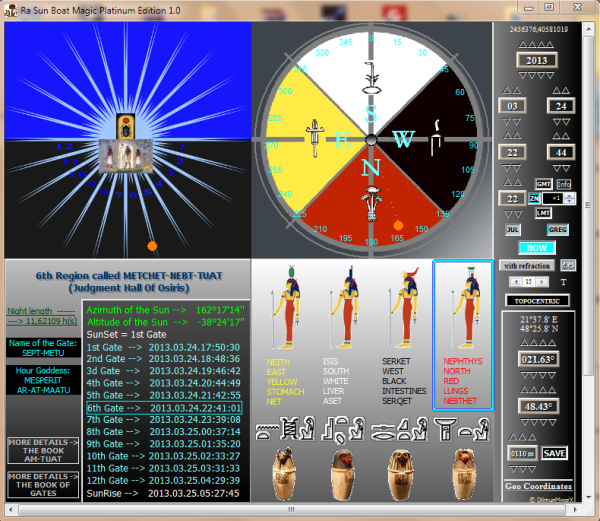 The 'Book' Am-Tuat and the 'Book' of Gates are the Ancient Egyptian cosmological treatises
describing the architecture and inhabitants of the Tuat - the Underworld - which the boat
of the Sun God Ra traverses during the nocturnal hours. The magical Travel was inscribed
on the walls of tombs. By the beliefs of the Ancient Egyptians, the passage of the
newly deceased soul into the Other World corresponds essentially to the path of the Sun
during the hours of the night; the soul is required to pass through a series of 'Gates'
and 'Regions' at different stages in the journey. The Gates and the Realms are associated
with different Gods and Goddesses, and they require that the deceased recognize the particular
characters of these divine beings created by the Power of his own Magical Imagination…

Ra Sun Boat Magic is an outstanding astrology software displaying the nocturnal and the diurnal
path of the Sun, the Ancient Egyptian 'Hours' (determined by the given geo latitude, altitude,
day of year, refraction etc.), and representing the azimuthal regions divided
by the cardinal points and ruled by the four great Godesses: Isis, Nephthys, Neith and Serket. 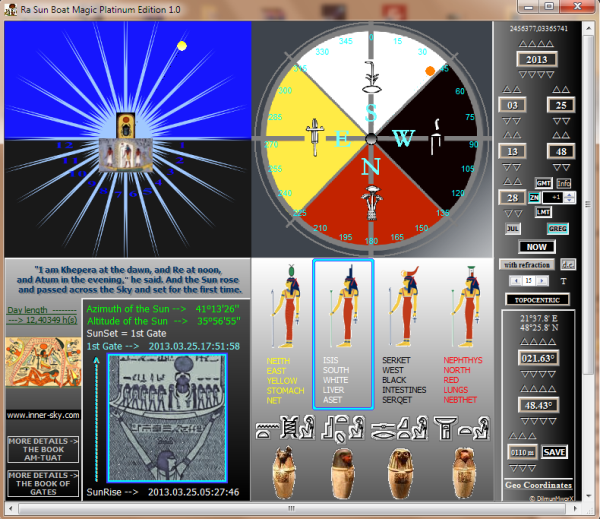 Ra Sun Boat Magic Free Edition represents only the basics of this astrological approach
(with fixed geo coordinates, calculating data between 1400 and 1800 AD.)
You can understand the essentials of the symbolical 'Hours' and track of the Sun God
entering in the several Realms.

The PLATINUM EDITION displays the precise symbolical 'Hours' above your own/chosen locality
from 3500 BC until 3500 AD, the positions of the Gates and the actual Realms.
It can follow your Computer/System Clock.
(The activation code will be generated uniquely for your chosen computer
where the software is intalled to.)
The price of this software is 135 €.